Not So Wordless Wednesday - Flynn 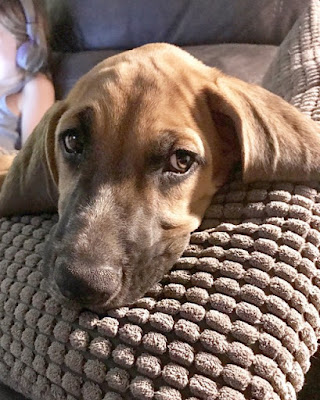 Meet Flynn - he's half Bloodhound, half Bassett Hound (yes). He and his puppy brothers and sisters and Mom (Bloodhound) and Dad (Bassett Hound) were left in a field to die last month in Texas. Whoever owned the land spotted them and called one of the rescue folks. Even as busy as everyone was with the hurricane, they were taken to safety. Flynn was really skinny and sick with hookworms.

One of the rescue ladies, a Facebook friend of mine who has two rescue Great Danes and is used to large breeds, said she'd foster a couple of the pups.  Her husband was a submariner like my beloved brother, though a different generation, and they are just the nicest young couple. Flynn needed some extra medical attention and lots of love but he finally started to eat and put on weight.   My friend REALLY bonded with this dog, who stayed with her longer than his sibling due to his poor health.  But with a young family, and being a stay at home Mom with a small sewing business on Etsy,  there just wasn't the hundred's for the adoption fee.

Some money magically appeared in her PayPal Account to pay for the adoption fees and a couple months of food and Flynn is now adopted and thriving with a beautiful little girl who loves to play with him. So from your "Aunty LB", welcome to your furever home Flynn!
Posted by LBJ at 9:00 PM