I Wouldn't Pee In the Yard When It Was 10 degrees Out Either. 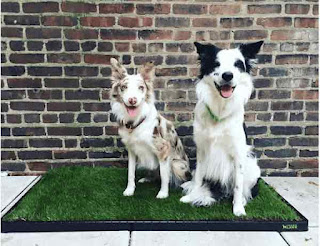 A few years ago, when I was still commuting between Indianapolis and Chicago after getting married and waiting for my job transfer we got hit with a "Polar Vortex".  As a former airline Captain, I can explain that in precise and scientific meteorological terminology.

I had sold my house and was renting a small condo in a nice complex with its own dog park.  But there was no "yard" and taking Abby outside to potty late at night was a challenge.  She did NOT want to leave the front porch and I don't blame her with temps down in the minus 20's. I also didn't want to risk falling down in the dark and freezing to death either. 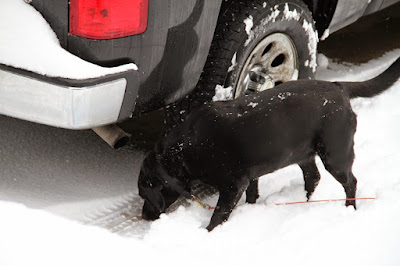 So we went to plan B, which was setting up a doggie potty station in the attached garage with some turf and a shallow pan to hold it. It worked - she did her business and came right back in.  But it wasn't as big as I needed so she sometimes "missed" which meant clean up. Then I had to figure out how to replace the turf as it was winter and the stores weren't selling any. Not fun and it meant going out in the cold to find more turf.

So I was happy to find when I moved here that there are companies that specialize in such things.  Abby would usually just go really quickly off the porch (on a leash so she couldn't spend 20 minutes trying to sniff everything before coming back in).  Lorelei is another story.  She just doesn't want to go out at all when it's really wet and cold. 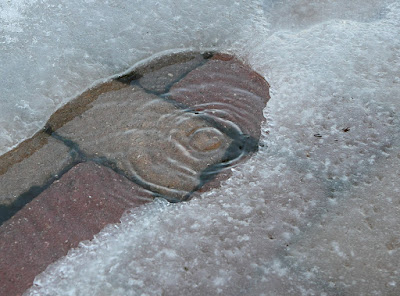 So glad I found Doggie Lawn - we set up her potty station on the front porch (which is open-air but covered) and when the weather is really bad she just goes out, does her thing, and comes right back in.  With a doggie gate up at the steps she can't leave the porch and I can watch from inside where it's warm, rather than standing out by the back stairs hoping I don't fall and becoming a Momsickle by morning if my husband is on the road. (I don't like to let her out at night unattended, we have coyotes around as we live near a large forest preserve)

Signing up online was easy. After the initial set up with the plastic turf caddy and some scented spray to quickly train her (note: do NOT use as an after-shower body spray, for dog training use only :-) I get a new strip of custom-sized turf every 3 months (or more frequently in the winter), and the old bit is easily composted.  It magically arrives on the porch in a big "bark alert" truck and I can adjust the times between deliveries as needed.

Today, she got a walk and later lots of playtime with her ball in the yard when it was a balmy 22, but tonight, when the wind chill is supposed to get to minus 15, we will be heading to the porch before bed and first thing in the morning while the coffee brews.