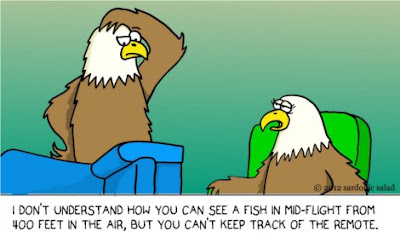 Lorelei Lab here - Mom has a good friend that is a minister up in Alaska.  He shared the local police blotter, and she started snorting her coffee reading some of them, especially the one about the wildlife.

So for today - we present Police Blotter:  Never Mind

Welfare Check
Officers responded three times to a residence where an intoxicated occupant repeatedly called the police for assistance with unspecified problems, and then insisted that they leave once they arrived on scene. No criminal activity was observed.

Theft
An intoxicated caller reported a possible theft. The caller was unable to articulate why she thought there was a theft and hung up the phone.

Assistance Rendered
Caller reported being attacked by swooping eagles. She was afraid to move for fear of injury. Officers responded to assist. As the officers arrived, the sun set. The eagles seemed to lose interest in the caller once it was dark.  She was able to continue walking down the hill unmolested by her feathered attackers.

Traffic/Roads
Officers investigated a possible oversized trailer. The trailer was under water when an officer arrived on scene and its dimensions could not be immediately ascertained.

Suspicious Person/Activity
Officer investigated some blinking lights on a piece of heavy equipment. Nothing was found to be amiss.

Animals
Caller reported that someone was feeding the eagles causing a hazard as one of the eagles had flown into her truck. Officers investigated and discovered that the eagles were not being fed but were congregating, as eagles are known to do.

EMS personnel provided care and transport for a man who had been struck in the back with a 35-kg block of frozen fish.

Barking dog complaint. An officer responded to the residence at which the barking dogs allegedly live, and found the two dogs there were the only dogs in the neighborhood that were not barking.

An officer responded to the PCR regarding a report of smoke emanating from the building.  The officer determined that the smoke was coming from a chimney in the Burma Road Chapel.

Two police officers and the ACO chased a small vulpine dog that was frolicking in traffic, from East Broadway to Dutton to Jack London Drive, where it eventually fled to the confines of its own home.  The owner was cited.

Drunken caller in Florida reported that her husband, in Unalaska, had threatened to kill her. She reported as well that her husband had tried to hit her 19 years earlier, but had instead hit their daughter.  An officer asked the woman to phone with more information when she is sober.

Thanks to our friend Reverand Paul and for also sending the follow up article about the young officer that writes the blotter.

In one Alaskan fishing village, crime is a laughing matter. It's not the crimes that have residents chuckling so much as how they're written about. The Unalaska crime report is full of eagle aggression and intimate encounters gone awry in the Aleutian Islands.

When Sgt. Jennifer Shockley (now the Deputy Chief) heads out on patrol each day, she's got the police blotter on her mind. Her goal is to paint a detailed picture of the town's often ridiculous crimes.
"I can only imagine that someone who's never been here would think that this is some kind of Twilight Zone town where every form of human oddity and absurdity exists all at once — exacerbated by alcohol," she says."