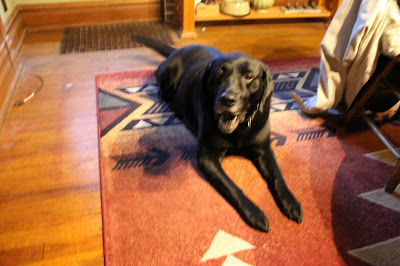 The Chicagoland weather just can't decide if it is winter or Spring.  We had temps of almost 80 the other day, then it was down in the low 40's.  Today is cold and windy with rain in the forecast.  Maybe it's El Nino. 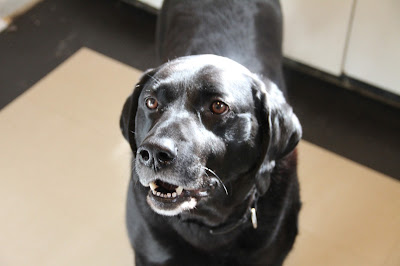 Abby, No HBO words! But it is a good day for a warm cheesy casserole. How about biscuit topped chicken pot pie. This is a great, comfort food meal, on a chilly Spring night.  It's also one that several friends with small children/grandchildren have made and EVERYONE raved about it, the little ones (and husbands) having seconds.

With canned biscuits - it's surprisingly easy to put together and if you are vegetarian you can replace the meat with Gardein "chickn" nuggets or extra veggies including potatoes. 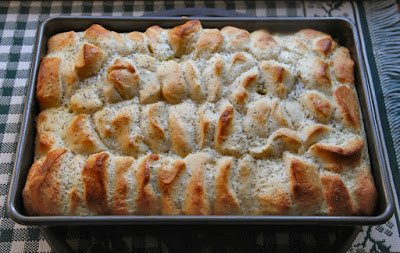 1 and a 3/4 cups of homemade cream of cluck soup* (or use cream of chicken soup and omit the salt in the chicken filling.)
2/3 cup mayo (don't use low or non-fat kind)
2 teaspoons Worcestershire sauce
two pinches of crushed red pepper
dash or two of salt and pepper
3 and 1/2  cups cubed cooked chicken breast
2 and 1/2 cups chopped veggies (if frozen - thaw but don't cook)
1 medium onion chopped
1 cup grated sharp cheddar
2-3 tubes refrigerated buttermilk biscuits (if using the smaller four pack of bargain biscuits it will take a few biscuits shy of 3 tubes.  If using homemade biscuits you'll need a couple of dozen).

I have to segue into a story - many years ago, I was on leave as a pilot when we were alerted to a nearby robbery and possible explosive device.  It seems a man (with a pegleg, seriously you can't make this stuff up) robbed a jewelry store a couple blocks away from where myself, another pilot, and a couple MP friends were getting lunch.  The robber pointed at a shiny tube in his coat and said it was a bomb and to do what he said.  Suddenly there was a popping sound from beneath his coat and the clerk said, "that's not a BOMB, that's a tube of Pillsbury biscuits!" and the man ran from the store. A man with pegleg covered in biscuit dough was pretty easy to identify and he was soon apprehended. 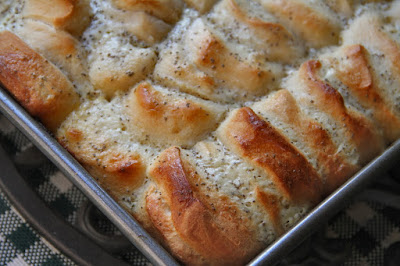 Back to our recipe.

Heat oven to 375 F. Saute chopped onion in a tablespoon of butter or olive oil to caramelize and release the sweetness. In a very large bowl, mix onion with soup, mayo, Worcestershire, red and black pepper, salt, chicken and veggies. Transfer to a lightly greased 13 x 9 inch glass casserole or lasagna pan. Sprinkle with cheese, cover with foil and bake at 375 F.for 20 minutes.

It's important you get the filling very hot before you put the biscuits on, or they will not bake properly.

While it cooks, separate the biscuits and cut in half.

In a bowl, combine sour cream, celery seed, eggs and salt, whisk up with a fork and set aside.

Remove casserole and place biscuits, cut side down over hot chicken mixture, about an inch apart. (If using canned biscuits, you will have a few biscuits left, save for later or freeze). Pour the sauce over the top and spread with a spatula. 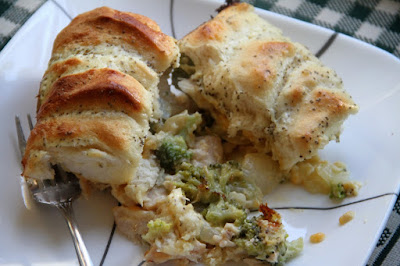 Immediately return to oven at 375 F. and bake uncovered until top is golden. Bake about 4 minutes more than what the biscuit package calls for. For me, using small biscuits in my 70 year old gas oven, it was about 18 minutes after returning it to the oven with toppings, turning it half way through.

With the 13 x 9 pan, it's enough for a large family and freezes well. The recipe also cuts in half easily to make an 8 x 8 pan.

Makes about 4 cups worth, I put in separate freezer containers and freeze and thaw and use as needed.

Directions
Make a white sauce of milk (or half and half), flour, and melted butter. Add chicken. Add sugar, salt, pepper,sage and garlic (may use more or less as desired). Mix well and simmer for 20 minutes over low heat.