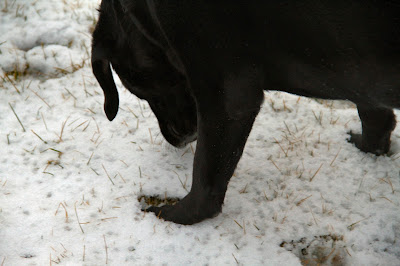 Temperatures in northern Illinois dropped from the 70's to the 20's within a couple of days.  I can't complain, as according to Facebook, a post of early November of last year was Abby romping in some snow in our backyard and this year we maintained spring-like weather (including heavy thunderstorms) until the third week of the month.

But it made for a weekend where it was just nice to stay inside, and warm. , ,

The last three years have been a blur, I got married, moved twice, wrote 3 books, put 36,000 miles under me back and forth to Dad's and 30,700 miles between crash pad and home every weekend before I could get transferred.  I lost my beloved brother and my dog Barkley and adopted Abby Lab - the best thing I could have done.  FINALLY, I have time to just sit and read that big stack of books that I keep here and also at my  ninety-six-year-old Dad's house. 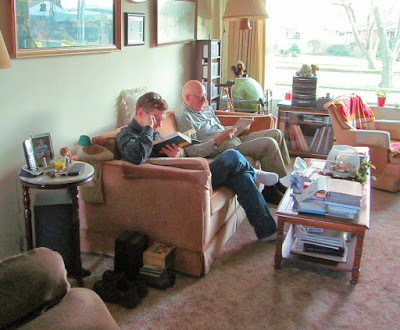 My husband and Dad - enjoying their reading.

I also plan on trying out some new recipes. I made this for dinner Sunday night and it was a huge hit and some of the creamiest mac and cheese I'd ever made. 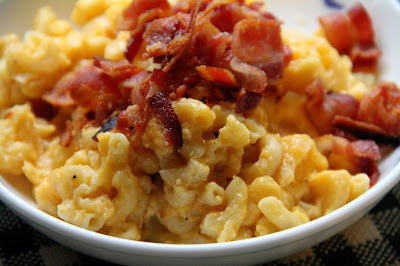 After I made this Abby was begging (she did get the little shreds of cheese stuck to the food processor blade and bowl) and my husband was stealing spoonfuls as it cooled, I looked at him and said: "has anyone in your generation actually eaten homemade mac and cheese?"  He shook his head - mac and cheese comes in a blue box or a frozen red box. . right?

This was the best mac and cheese I've made in several years, and aside from standing at the stove stirring for 14 minutes (with wine - I'm ambidextrous when it comes to whisking and drinking wine), it was super easy to make and my husband raved about how good it was.  Even these pictures, taken two days later as leftovers with some fresh breakfast bacon (it was too dark when I first made it for photos), doesn't do it justice as to how creamy it was when it came out of the oven. 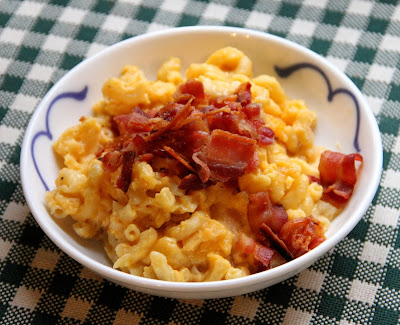 12 ounces sharp cheddar (I used 8 ounces of sharp cheddar, grated from a block and 4 ounces of pre-shredded cheddar/jack leftover from making enchiladas Saturday). If you can, grate your own. Pre-shredded cheese doesn't have the moisture of block and has preservatives. Shredding your own tastes SO much better; is cheaper, and makes a creamier mac and cheese.

Mix flour and spices in a small cereal bowl.

Bring a saucepan of water to a rolling full boil.  Stir in pasta.  Cover and turn off heat.  Set timer for six minutes. (seriously - for servings up to four -  I never stand and boil my pasta any more, a trick I learned from Murphy and Stanley's Mom. I just give it a quick stir, cover with a tight lid, turn off the heat, and walk away, using the normal time on the box).  Since this will cook further in the oven, I only cooked it to "al-dente", so it was still a bit firm to the bite. 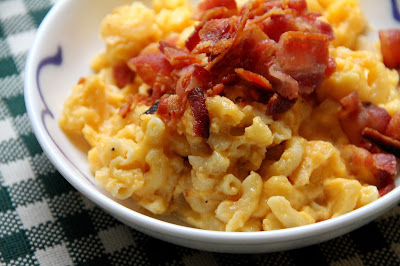 When the timer goes off for the macaroni - drain, then rinse with very cold water and drain again so it quits cooking and place the pasta in a large mixing bowl.

Get timer, beverage of choice, and potholder on standby and in reach.  Once you start the next step you do NOT want to step away from it for "another glass" or "let the dog out" or you will  likely scald the milk or end up with lumps.

Melt butter over medium-high heat in a heavy saucepan. Set a timer for 14 minutes. Whisk in flour and spice mixture, over medium/high heat, whisking constantly for two minutes.  Use a real whisk, (even WalMart has them), rather than a fork.   In a slow stream, add the milk, whisking constantly. Whisk until the timer goes off and the mixture is thickening at medium-high heat.  You want it steaming but NOT coming to a full simmer (bubbles).

Turn off heat and stir in grated cheese, stirring until it's melted.

Pour cheese sauce over macaroni, stirring to break up macaroni and place in 8 x 8 x pan.  Bake uncovered at 375 for 20-25 minutes until bubbling around all of the edges and just starting to brown. Let cool for 3-5 minutes.

Top with chopped bacon or buttered bread crumbs for a vegetarian version. I believe there was a vegetable in the room so we covered all food groups. 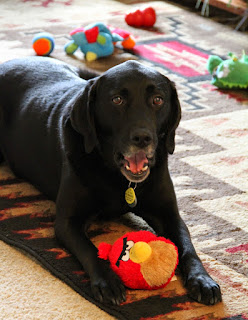