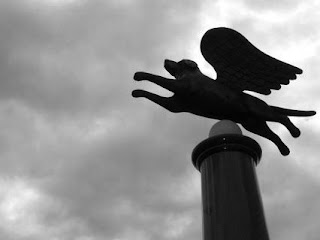 It is with a very heavy heart and tears that I tell you what much of Blogville already knows.  Our friend Easy Rider passed away last night, while in care of the animal hospital.  There was no pain for him at the end, but there is pain for his family, who are grieving very hard as many of us have in the past.  I don't know if they are ready for words yet, but I'm offering these, having walked in their shoes. Know that your Blogville family cares, we pray for you, and we are here if you need an ear. -  LB

The drive from the vet to home was as long as a lifetime, a collar and leash, lying on the back seat where only hours ago, lay someone so excited to be going to the vet, never afraid of that place, only happy for the extra attention and special treats.

Can I live with the drive, knowing he would never return?

There is no pain, no regrets.  Everything I gave him, he gave me back ten fold, listening to me chat away about my day, things that by my oath of duty, I couldn't tell anyone else. He was my black knight with wagging tail.  He was the finder of slippers and the keeper of hearts.

He was a dog, but he was much more than a dog.

He was support, he was patience.  He was the promise that, even with the worst mistakes, he still loved me.  He was that fire that cauterized me against loneliness and fear, the thump of his tail like the sound of a heart in the womb, creature comfort there in the dark and unknown.   He became the unevictable place in a heart so bruised it had pushed everyone harshly away that got too close. He taught me to trust again. With that trust, I found my heart's twin, who happily became his family, as well.

As a family, we take care of each other.  Having a pet is a commitment just as is any bond, either visible or invisible with another living creature.  It's not just being a good friend during the good times, it's being a friend during surgery, explosive doggrhea, and that pile of vomit in the corner on the one square of carpet that wasn't protected by a cheap throw rug.

You do what you can to help them during those scary, shadowed times, with tender, soothing words. You don't lay your hand upon them with forceful curse and belittlement.  They look at you to be the strong one, the better one, even if it's difficult to do.  They trust you to act from your heart and not from the infinite, internal voices of human fear and angst.

They pay it back in ways that can't be captured, but by the measured beat of a tail.  On those nights when you come home really, really late from work, your soul weary, the house dark, they will quietly come up to you, leaning into you, drawn from their slumber to your side like steel and magnet. At that moment, there as both your hearts beat in the silence, you realize that every measure of sickness and health was worth it.

For there is a great measure of trust and love contained in that warm web of bone and fur, the eyes that can commandeer your pancakes and the tail that wags for you as if you were the only person on the planet for them, and maybe you are.

Their time is so short, indeed, but that does not mean you should not love.  In "people" years, Barkley was probably sixty something. But they were years condensed down into their core elements, as if a simple ordinary succession of days were not enough, as if the love and all of that faithfulness, the freedom of the field, and the tug of a leash toward the horizon was compressed down into something as hard and brilliant as a diamond.  Everything, every single element of so many long days is there in that short span of time, compounded into that one leap, one surge,  toward the lights of a vehicle in the drive, one joyous bark that contains within it simply, "My person is home.”

He cared nothing about where we lived, how I looked or how much money was in the bank.  All he cared about was how to bequeath that which sustained him, in his too short life, his faith and his love, as he patiently waited for my return.

When he greeted me, he seemed to know when I just needed to sit in the quiet.  He seemed to know when I wanted to play.   If there were a ball to be thrown, he would abandon all restraint and gave every fiber of himself, to reach for that which was before only a dream--unmitigated glory.  His life was not deadlines, or deals or caring about the things that in all reality will not matter at the end of life.  His life was simply a joyous run ahead of that avalanche of time that would be his enemy had he any concept of it.

He was more than a dog. He was love that crept in on four paws and remains, as long as memory lasts.