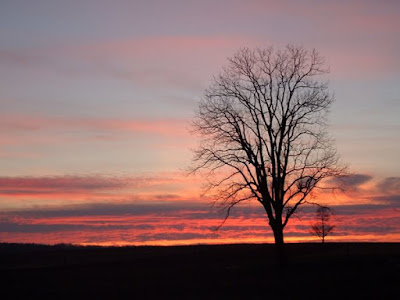 It was one of "those" days.  I was up late last night - Dad had taken a fall earlier in the week, and his dizziness was a mild UTI but I had to stay up late enough to ensure he got the right meds, and got into bed safely at which point his evening nurse goes home. My husband was gone overnight, so there was also snow to shovel and a dog to walk.

So 4:00 a.m. arrived way to early, and with my husband on the road, to roll in later, I had to walk Abby before work, which for me starts at 6 a.m. So I'm on the road before the sun peeks up from the horizon.  I do miss when I worked and lived in Indiana, when it was a short country drive to the office, with time for reflection and the occassional photo.  Now, I'm dodging IDOT specially placed potholes (to increase your maneuvering skills), people that drop into my lane without notice like Frogger, and the Chicago "it's legal for 6 cars to turn left after the light turns red, it's a state law I think.")

Then work, including a long polycom, a baby shower for a colleague on my lunch hour, followed by over  2 hours in traffic to get home (for a whole 15 miles), due to hitting all the trains running east to west and a car stalled in the clogged interchange to the freeway.  It was 6:30 when I rolled in, three hours later than normal.  I had 30 minutes to get dinner prepared from the crockpot with salad to go with it, eat and call my Dad, as he expects me to call at EXACTLY at 7:00 (or he gets worried/upset -  it's a "I'm 96 and this is the one thing I can control" issue which I TOTALLY get).

But it makes for a hectic arrival at home sometimes when either or both of us are late arriving.

So I wasn't happy to walk in to THIS on arrival home.  Abby T. Labrador had murdered a couple of rolls of paper towels, that were left wrapped by the back door when the groceries were brought in the other day. 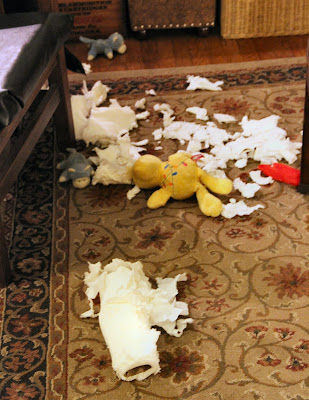 It looked like a crime scene, with Christmas Big Bird sprayed out on the floor like a crime victim, two boys in blue combing the scene for clues and a red nosed reporter trying to get a scoop. 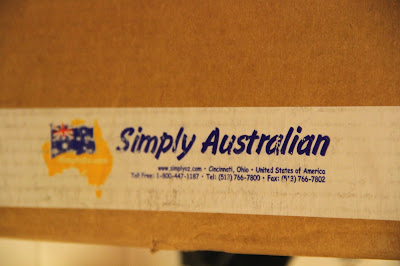 I turned the box so you could read the contact info.

But there was a couple bright notes - a call from the dog mom of
to catch up - such a sweet lady, and this box  from Simply Australian, which is like Chewy boxes for humans.   (By the way - if any of you are good enough with blogger to help Cookie's Mom add a sidebar link to her Go Fund Me for her dog's meds, difficult on a senior's income, I know she'd appreciate it, I tried and had no luck as her settings are different than mine).

Simply Australian.  Oh boy! Oh boy!  They're in Cincinnati so my order got here quick. (By way of explanation:  my grandfathers both died before I was born, and my grandmothers died before I was four.  Our next door neighbors, an older couple from Australia, unofficially "adopted" my brother and I as our "grandparents" and I still treasure a little book about a kangaroo they inscribed to me before they passed).  So, when I saw that sweet Roxie in Australia sent some to our friend Ernie for Valentine's Day I thought "it's been too long since I've had. . .

Tim Tams".  You haven't lived until you've done the "Tim Tam Slam" where you bite off each chocolate covered end, exposing the delicate cookies and cream filled center and then sucked your coffee or tea though it, to then polish off the gooey remains. 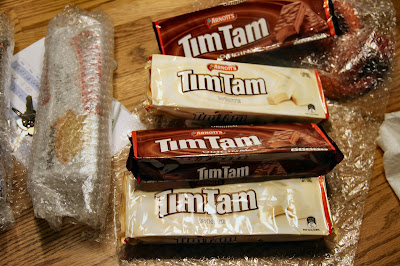 My husband can eat the healthy stuff.  After my long day, I know what I'M having for dinner, a cuppa tea and a Tim Tam.  But given how my fingers and lips will probably look like when I'm done, I can't give Abby Lab a hard time for HER mess.