For "The Man" At Phod's House 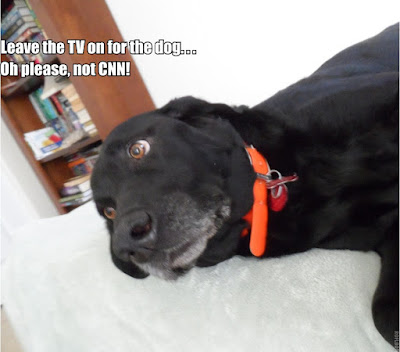 CHAPTER 7 – Getting Skunked Is Not Just For Cribbage (The From Book of Barkley - Love and Life Through the Eyes of a Labrador Retriever by L.B. Johnson)

We’d finally moved to the newly constructed house. It was located only a block or so from where my rental unit was so Barkley and I walked over to it and around it a couple of times a day.  I hoped that would make the transition to living there an easy one for a young dog. I was looking forward to it.  It had lots of space for me, not needed really, but I was up and coming in my field of work, with an associated pay raise, and it seemed everyone was buying homes out in the fancier subdivisions, so I figured it was time for that move.  Besides, Barkley needed a yard. The yard was a lot smaller than I expected given the cost of the home, but there were about thirty acres of woods behind (future subdivision) with an assortment of gentle critters that made for a nice view.

We’d been in it a couple of months when one night, Barkley begins growling and barking at the door. I figure it is his arch-enemy, the squirrel, so I let him out to the newly fenced yard and he went running out back towards end edge of the woods, barking fiercely. This wasn't a squirrel, which he barks at almost with laughter, but something bigger and unknown to him. Something he perceived as a real threat. 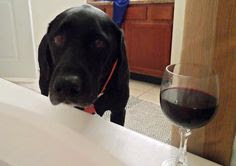 He could have stayed in the house; he could have barked a warning and come on in. But there was something out there that was nothing he'd seen before and he was going to go after it, to find out that it just takes two to postulate the certainties of being outgunned.

He charged at the darkness with no fear, and no quarter, only to get sprayed by our equivalent of a weapon of mass destruction, a big skunk.

Fortunately, his enemy's aim was off and he didn't get it in the face, but Barkley was still seriously stinky.  Enough to make us both tear up. I called a friend who raises hunting dogs to see what I should do. I'd heard that using tomato juice will get rid of the smell. After his wife quit laughing, they told me NOT to use tomato juice to get rid of the smell but to use something that works much better.  Well, there's just no politically correct way to say this but they suggested I use feminine hygiene douche. Apparently, I guess it works really well on . . . well you get my drift.

So I put Barkley in the bathroom and make the dash to CVS about nine in the evening to buy about twenty boxes of the stuff, enough to add to a little water to give him a bath in the tub. The girl at the counter is looking at all the boxes, then at me, and a strange puzzled look comes on her face.  She says "oh - my, you're certainly buying a lot of this tonight?” Of course, by way of explanation, I say quite cheerily. . . . ."Oh, it's for my dog”.

She couldn't get me out of the store fast enough.

Barkley took his "bath" and almost smelled, well, "springtime fresh". Almost. But not enough where I wanted him on his bed in my room, so I put him in the basement, in a bigger crate I’d purchased for him, on a nest of an old, comfy, washable bedspread. I then went up two flights of stairs, got a shower and fell into bed. After about fifteen minutes of lights out, I heard the gentle whine coming up through the heating ducts, that death-like moan of loneliness. So despite a smell that could only be described as "Eau de French Brothel", I let Barkley upstairs.   He was damp and still a bit in shock, but he promptly settled down on the carpeting, where he could guard the bedroom door in case the skunk had learned to pick a lock. 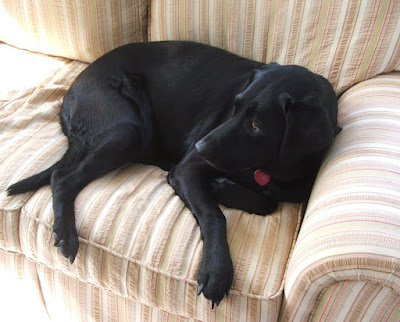 I didn’t mind.  After all, he took the blast from the skunk simply trying to protect me and his home from an intruder. Frankly, he would have gone up against a Grizzly to protect me, without hesitating about it, weighing the options or thinking "what's in this for me?" If need be, he would have written with his life his own time's final footnote while I sat inside reading dusty chronicles of the past, unaware of his sacrifice.  All he asked in return was love, and my company, all that he needed to assuage his heart's thirst.

The next evening as  I sit at my computer, a mug of tea sit nearby as I get ready to go on duty at midnight, and it really sinks in.

Those that truly love us, do so like we are, without expectations or demands. They forgive human frailty; they embrace our joys and they share the sorrows. I have had friends like that. I have had a dog like that.   Dogs are simple, give them your loyalty and affection and they will give you theirs. Sometimes it takes nothing more than a round with Pepe' Le Pew to remind me of all that they do for us and how lucky we are to have them.

But I'll probably avoid that CVS for a while.