Saturday Eats - A Brownie with Teeth 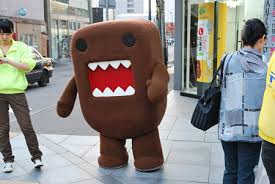 Had the kind of week that leaves you craving a big brownie?

Sure you can make a gluten free, fat free, sugar free brownie. That would be known as "compost".

Mom's best friend LOVES good chocolate, and when they get together they make some seriously good brownies while her friend's six rescue cats (the first four of which are featured in The Book of Barkley) play detente with Abby on "box day". 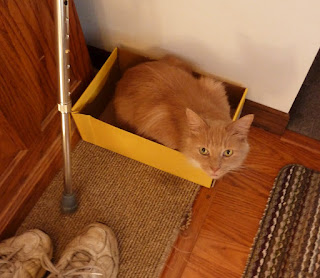 Goldie hides in her box away from the crazy black lab.

So they aren't going to make healthy brownies - they are going to make the Domo kun of brownies - dense, chewy, able to hold up to a glass of milk, and seriously taking away any chocolate craving you had. These are dense and chewy and very rich - you'll never go back to boxed brownies again. For those of you who haven't been to Japan - Domo Kun is the official mascot of Japan's public broadcaster NHK, and you see him all around town. He's shaped like a giant brownie with teeth and legs.  I've several toy plushie Domo Kuns around the house that Abby carries around in her mouth. 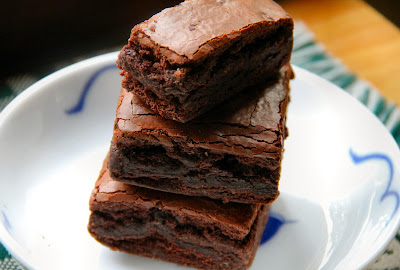 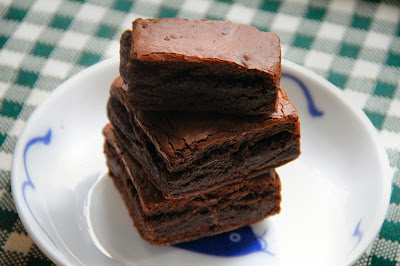 Preheat the oven to 350F/180C. Grease an 8 x 8 pan or drape parchment paper across it so you can just lift the brownies out when cool.

In a medium bowl, whisk the flour, cocoa powder and salt  together.

Put the chocolate, butter, and coffee in a large heat-proof bowl and set it over a saucepan of simmering water, stirring occasionally, until the chocolate and butter are completely melted and smooth. Quickly whisk in the sugars in until combined, then remove from heat and let cool to room temperature.

When cool, add 2 eggs to the chocolate/butter  mixture and whisk until combined. Add remaining egg and whisk. Add the vanilla extract and stir until combined. Mix ONLY until combined - too much mixing adds air bubbles into the egg mixture which makes for a cake like brownie - not our goal here.

Add the flour mixture and chips to the chocolate mixture and fold until just combined (you will likely see a few small streaks of flour still).

Pour the batter into the prepared pan and spread with a spatula until evenly distributed in pan.. Bake in the center of the oven for 20-25 minutes, rotating the pan halfway through the baking time.  Stick with a toothpick at 20 minutes. Brownies are done with the toothpick comes out with a few moist crumbs attached to it, you don't want it to be a dry toothpick as in making cake.