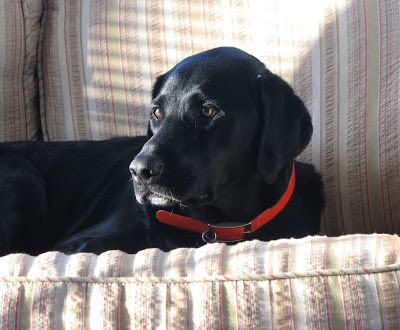 I don't know if any of you read sci- fi, or particularly the works of the lateTerry Pratchett but he had a dog character in his beloved Discworld series that made me laugh, as in some of his personality, he reminded me much of Barkley.

Gaspode the Wonder Dog is a small terrier-like mongrel dog who has the ability to think and speak like a human being. Gaspode is somewhat scheming and avoids interacting with humans outside of his own interests, which he explains as a good survival trait for a stray animal's rough life. He has an extreme dislike of baths and a subsequent unpleasant mix of odors and minor diseases (indeed, according to Gaspode, he suffers from multiple ailments - including licky end,  and is only still alive because the various diseases are too busy fighting each other to kill him).

Gaspode can also understand the language spoken (or barked) by other dogs, and in The Truth, helps others translate Wuffle's recount of a high-profile crime in order to uncover a criminal's alibi.

Gaspode takes advantage of the fact that most people seem unable to process that a dog can talk, as the phenomenon is usually interpreted as a subconscious self-suggestion by others; notably, he tends to speak sounds like "growl" and "bark" rather than actually vocalize, except for a select few, whom he trusts. 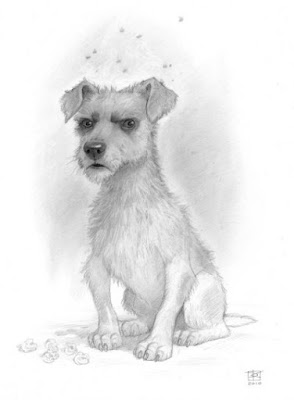 Gaspode sometimes introduces himself as 'Gaspode the Wonder Dog' and is named after the Discworld's equivalent of Greyfriars Bobby and Hachiko, dogs who showed exceptional loyalty after his master's death. Gaspode cynically believes that the reason The Famous Gaspode stayed on his master's grave howling until he himself expired was that the headstone had been lowered onto his tail.

The present Gaspode has dreams of running with a wolf-pack, and like many dogs vacillates between the desire for wildness, trying to curry respect among other dogs, and the begrudging need for human contact. These Walter Mitty tendencies make him reminiscent of another canine character, the Dog of Murray Ball's long-running comic strip  Footrot Flats.  Both have been heard to sarcastically remark 'Woof bloody woof.' 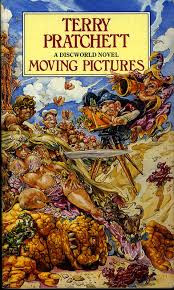 "Walk a mile on these paws and call me a liar."

"Woof. In tones of low menace."

"There's nothin' wrong with bein' a son of a bitch."

"I thought it was going to be bucket-of-water time myself."

"I can explain it in Dog, but you only listen in Human."

"... Percy the Pup here with a cold nose, bright eyes, glossy coat and the brains of a stunned herring."

"Maybe you should loosen her clothing or something."

-- Gaspode the wonder dog (Terry Pratchett, Moving Pictures)
If you enjoy fantasy or sci-fi  full of a lot of humor, you will find this book series a delight.