Abby can't have grains - and I'm gluten sensitive as well. Plus I'm watching my carbs to drop the few pounds I gained at the beginning of the holiday season. But after I baked her up some of her pizza flavored dog safe biscuits, I had a serious craving for pizza. Solution?

Start to on the table in less than 45 minutes including cooking time. It's Paleo and Keto friendly and has almost half the calories of frozen pizza and 1/4 of the sodium and carbs.  The crust is slightly crunchy on the outside and has a nice crumb - it's not a duplicate for pizza dough made with yeast but it was SO easy (the dough took 5 minutes to prepare) and tasty.  My husband, who said he was going to have a sandwich, ended up trying a bite and then going for the full-on pizza lunch.

In a medium bowl mix: 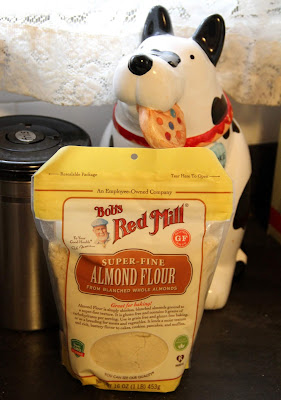 Form into a ball and place between two sheets of parchment paper.  Use your hands to flatten into a round.  I like a thicker crust so mine was about 1/3 of an inch - you can make it thinner if you like~ 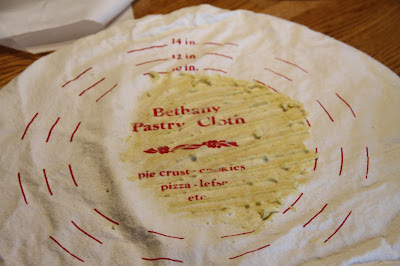 Pastry Cloth - FAIL!
Use the parchment paper to transfer the pizza crust round to a pizza pan and prick the surface with a fork to make small holes so bubbles don't form as it bakes. Bake in a 350 F. preheated oven 15-20 minutes (Edges should just be turning golden brown)  If using a thinner dough bake for 12-15 minutes. 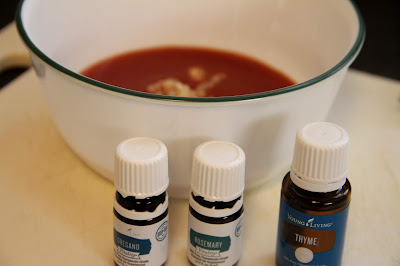 Heat in microwave for 1 minute and 15 seconds to warm just before crust comes out of the oven. 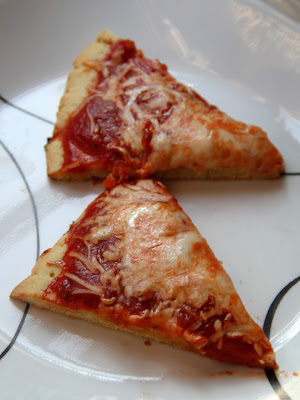 When baking time is up for the pizza, spread sauce on the crust top with cheese and bake an additional 10-12 minutes (Edges should be golden brown but not dark and cheese is melted.)

Cool three-four minutes, cut into 8 slices and then serve.  Almonds are hard for doggies to digest and may cause stomach upset so ignore the big sad eyes and give them a pizza flavored biscuit instead (recipe in the comments) 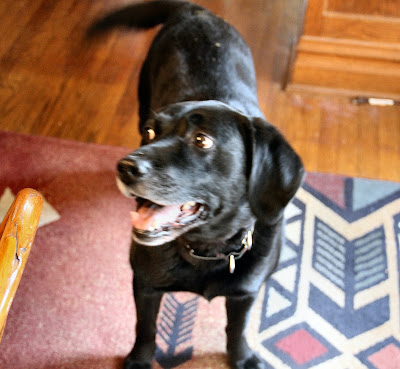 Yay! I didn't get pizza as almonds aren't good for my stomach and garlic is toxic but Dad gave me one of Mom's cheese and pizza flavored homemade dog biscuits!
Posted by LBJ at 4:19 PM