Sorry Charlie - the Cat's Getting the Tuna 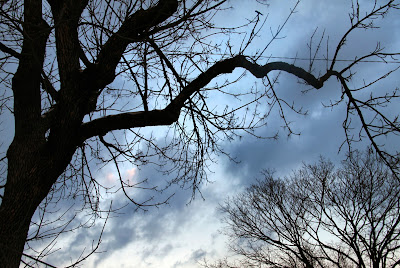 I've never really owned a cat - always being a dog lover (and my Dad was highly allergic).  I've cared for some for friends, sometimes for months while they were overseas, and I've had strays I've found, cared for, and then found good homes for, as at the time, I had a lifestyle that didn't allow for any pets. Abby isn't afraid of cats - but she's happier as the center of our attention, given her background of neglect.

But I have a soft spot for all animals.

Today, while my husband and I were playing backgammon, thankful Chicago has seen only some single digits this month and not had a lot of snow,  I heard a plaintive meow from outside.  My best friend has 7 cats (all dumped out in the country where she has land) and I know that sound. That's a "I'm scared, lonely, or hungry" sound.  I went out and saw a medium grey cat.  My husband came out and said he'd seen him around before, sometimes hiding under a thick shrub that offers some cover when it's raining or snowing. I'd also seen cat prints out by a brush pile by the shop where I know there are mice and chipmunks. 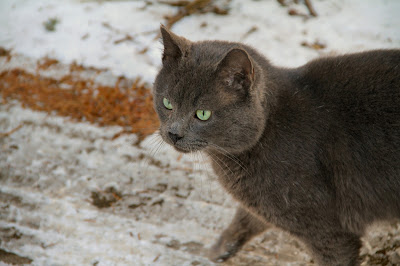 He didn't look malnourished at all, his coat  clean and in good condition, but he sounded hungry and he'd not been fixed, nor was he wearing a collar.

He retreated back under the shrub when I came out and I got a can of albacore tuna, opening it with the opener that doesn't leave sharp edges, and put it out near where he was hiding. 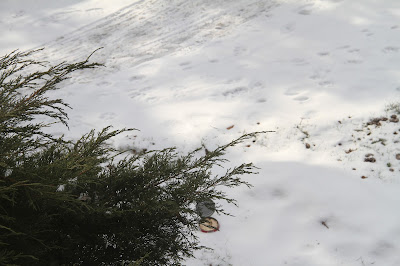 A half hour later, he came out to feast.

I quietly walked out, talking to him as he ate.  He came over and leaned up against me, obviously used to humans.  I didn't pet him as I didn't know how he'd react and didn't want to risk a bite out of simply fear from an animal whose vaccination status was unknown.  But I talked softly to him, and he want back to eating, coming back a second time to lean in against me, licking his chops, probably not having good albacore tuna before. 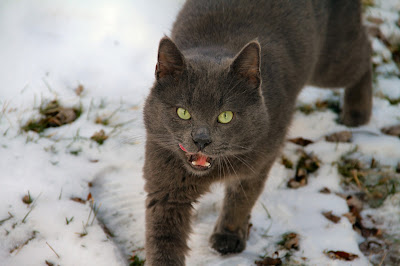 He might just be a pet that's an "indoor/outdoor" cat, forgotten perhaps for a meal today while his family was late getting home with the weather and will find his way home later, He didn't finish off the can, so he's not starving, perhaps just a little cold and hungry. If he stays, and appears to be not getting adequate food elsewhere, we'll make sure he's fed and has a warm place to sleep in the shop, and some vet care, until we can find him a permanent home. If he's a neighbor's cat, looking for some attention - we'll welcome the visits - even if it costs us a can of the good tuna or two.
Posted by LBJ at 8:16 PM