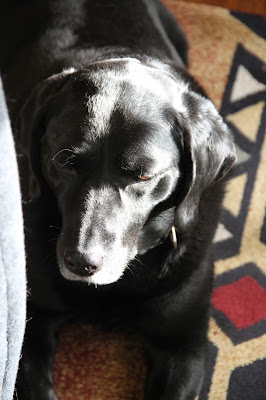 I won't name the specific outfit or the city, but if there are any Vets in the reader group - a little lesson on how to lose a patient in a little post about getting a new Vet for Abby in my new locaiton ( her previous vet was in the city where I had the crash pad.)   The place I went to first is a chain (you know, like IckDonalds) and I'll just refer to them as "IckHospital"

First Visit - The place was fairly close to home and I appreciated the big parking lot as the truck is difficult to maneuver, one of the main reasons I selected them for appointments starting in the Fall/Winter. Plus they advertised themselves as a "hospital" not just a veterinary clinic, something I found invaluable when we had Barkley and he took ill.

I arrive with a printed coupon provided on their website for a free exam.  Get charged for exam anyway.  Scheduled a nail trim (groomer on premises) in addition to wellness check.  Nails not trimmed. Her shots were due in a few weeks - told to wait and bring her back in, rather than do them early (second exam fee) 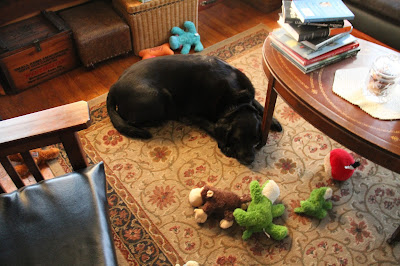 Mom won't let me on the couch if my nails are too long and sharp.

Last visit - schedule to look at a scab at the edge of her ear that was bothering her and that didn't seem to be from any obvious wound and showed up suddenly. It was loosening a bit but was causing her some discomfort. As my husband and I are waiting in the exam room, a lady in jeans comes in, not the vet that's on their website, no doctor's smock or jacket, no ID, doesn't introduce herself other than "well I guess I'm the doc that gets to look at you". She asks which ear it is, then roughly picks off the scab, to Abby's unpleasant surprise, and simply says "it's a bump", offering NO explanation as to what it actually WAS under the scab.   (I can see it's a bump, and could have paid someone off the street to tell me that). She just says "keep an eye on it for a few weeks" and moves to leave the room, apparently having the attention span of a goldfish.

I say (politely) - "if we don't know what it is, I'd like it removed ."  (Having lost Barkley to a sudden cancer, I'm acting on the side of caution.)

I am told "we don't do that here. " Apparently, although they list themselves as a "hospital" they don't have anyone trained in surgery on staff.   I was told I could go to another of their locations that has a surgeon. It's almost an hour away in traffic each way. They offer another office that's  slightly closer, but say the person there isn't a specialist and may not be able to treat her either but I'll have to make an appointment to find out. 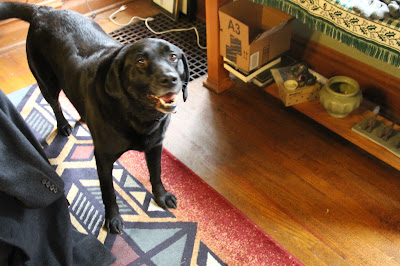 I ask "Why can't you do the blood work here since you are 10 minutes from my house and you're the same business, you can just send them the results?"

I'm told, "we may not know what kind of blood work they need" (hello - it's a sister office, could you perhaps just call and ask).

I'm given a brochure and and a phone number to call to set up what I need.  I do not.

I am charged for my exam of "the bump" and sent on my way. I may have burned gravel in their empty parking lot. 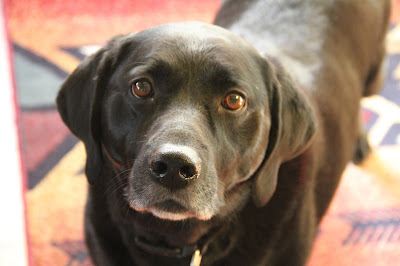 But Mom - what about my ear?

Next Day - new Vet.With her records in hand, I take her to the place Barkley went to when he had an ear infection issue while visiting my then-fiance and they were great. So I just parked on a side street and walked her over.

Fees were explained and we were promptly seated in an exam room.  A young man, dressed as you would expect a vet to dress, walked in.  After introductions and some general questions about Abby, the Doc looked at it and said "it looks like a Histiocytoma. They are usually benign but I can do a needle aspiration and look at the cells under the microscope while you wait. It won't hurt." 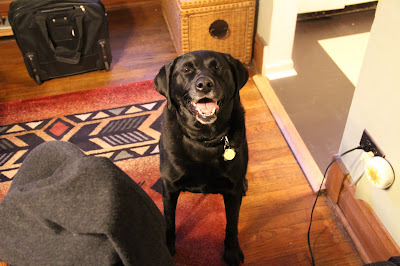 He leaves -I hear much giggling and laughing and a happy woof as Abby gets petted and fussed over by all the techs so she's at ease when she gets a little poke with the needle. A few minutes later, the doctor comes in with a happy Abby, explains what he did and saw and says that the cells look normal, and that type of growth should regress within 3 months as they normally do.   If it doesn't, it can be removed onsite, but it likely will just go away. He prescribed an ointment which he said would speed up that regression process while soothing the ear. When the front desk gave it to me they explained how to use it and how to store it. I made sure I thanked them for getting her in on less than 24 hours notice as well.

Needless to say - we have a new vet and a happy dog who has a less itchy ear.