Saturday Eats - Sandwich from the "Sout" Side of Chicago 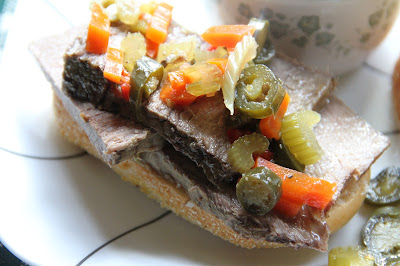 Created on the Sout Side of Chicago (that's right  -no "h" used in South), in the Italian enclaves around the now defunct Stockyards, the classic Chicago Italian Beef Sandwich (pronounced sangwitch) is a delicious, drippy, variation on the French Dip.

You will find it at a hundred restaurants and food stands all over Chicagoland and at most hot dog stands.  The exact origins are a subject of debate, but it became popular in the early 1900s as more families moved out of poverty and beef roast replaced cheaper bits of ground meat.  Nobody knows for sure the inventor, but the recipe was popularized by Pasquale Scala, a South Side butcher and sausage maker. During the Depression, in the late 1920s, when food was scarce, Scala's thinly sliced roast beef on a bun with gravy and fried peppers was a huge hit. 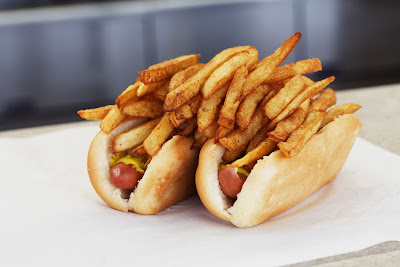 Like the famous Gene and Jude red hots (a must stop if you're around O'Hare, and be prepared for a line - they are THAT popular) there's just something about the Italian beef sandwich that is unique to the area, and if you ever visit family or friends in the area, you need to try it.

Today, beef "sangwitches" are a staple at gatherings, both family and business, all over the city.  I work in the city - it's a bit of a commute for me, so I have lots of time to see all the many restaurants and little ma and pa places that advertise this specialty and it's not uncommon for a large order of from Al's showing up delivered to the security area in the front of my building for several employees who make a group order. (Why yes, I'll be carrying these sandwiches through the metal detector for you , and I just MIGHT stop at my office first). 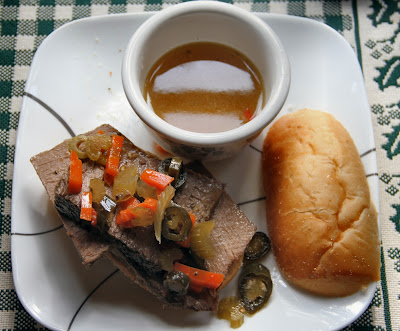 The meat which is normally cooked with a dry rub, is cut thin and served with some hot peppers mix on fluffy Italian bread loves.  You need some sturdy but fluffy white bread, because whether you call it "gravy" or "juice" you need bread that will soak it up without totally falling apart. Italian rolls are the way to go.


I wanted to make some for my husband, a native of Illinois (but from farm country down south), but it was a work day and I needed something I could do in a crock pot.  So my "Italian Beef" was born. It's not "classic" and the purists may take issue with it, but it was the best dang sandwich either of us have had at home in a long time.  Last time I made it, he ate it three meals in a row, rather than putting some away for leftovers to freeze like we do everything else. 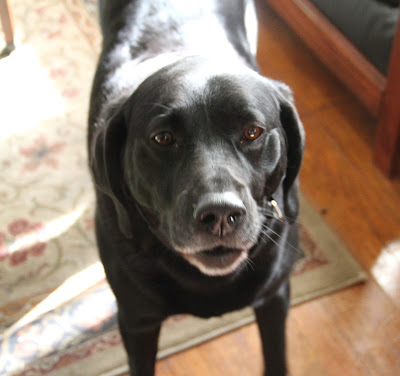 Give me some of that beef or I'm calling my boyz

The Johnson version of the beef sandwich starts with a jar of hot peppers known as "giardiniera".  In the Chicago area, where I picked some up at a store, they're commonly made "hot" with sport peppers or "mild" without, along with a (varied) assortment of bell peppers, celery, carrots, cauliflower, serrano peppers, gherkins and sometimes crushed red pepper flakes and banana peppers, steeped in a brine, then packed in an oil blend. If your store doesn't carry them the Vienne Beef company has them where you can order online.  They don't need refrigeration until opened.

To make this I also needed a can of beer  (why look, I have beer!  WHAT a surprise!) and a small packet of dry Italian salad dressing mix. 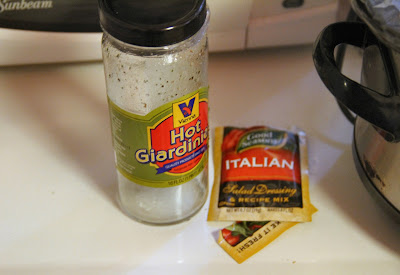 And a roast.  A nice firm rump roast.  The roast goes into a crockpot, then the peppers (with liquid) are poured over all. The pepper jar is then filled almost to the top with a good beer (light ale style) and the Italian dressing seasoning is added and shaken, then poured over the meat and peppers. Crock pot it on low 5-8 hours and serve on good bread with the "juice" placed in little bowls to dip your sandwich in.

The meat was so tender, I cut it extra thick to give the sandwich a nice "bite".  The "juice" has some heat from the peppers as well as a little sweet tang from the dressing mix and was the best part of the sandwich.  It may be a break from tradition, but it was a recipe I'm going to make regularly, if my husband has his say. It made 6 sandwiches using a sub-sized Italian roll with a nice little slice left to cut up and put in some leftover vegetable soup.